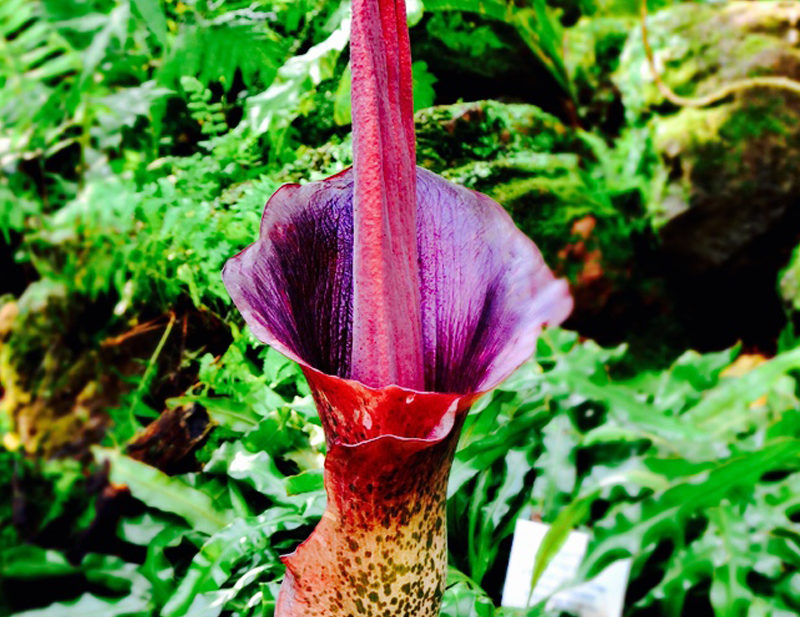 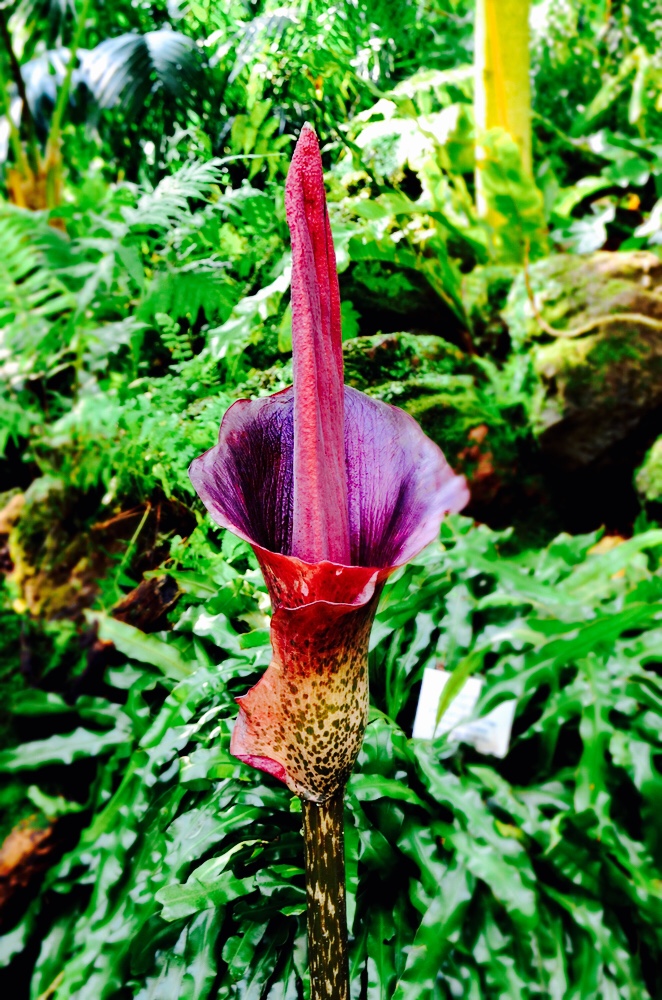 Who knew in a little Midwest town you could find something mysterious growing under foot. I didn’t until I meet my longtime friend and fellow gardener/plant lover, Pat Ward. Several years ago she and her husband had a good laugh at me when I was told to take a smell of their prized plant Amorphophallus konjac aka snake palm, voodoo lily, konjaku, or corpse flower.

Wowza, what the hell?! Are you trying to kill me? It’s beyond words… But, look at it, it’s unbelievable, isn’t it? Pat and her husband have taken care of this one for 30+ years. It’s had so many babies that she cannot count that she has carefully potted or given away through the years. 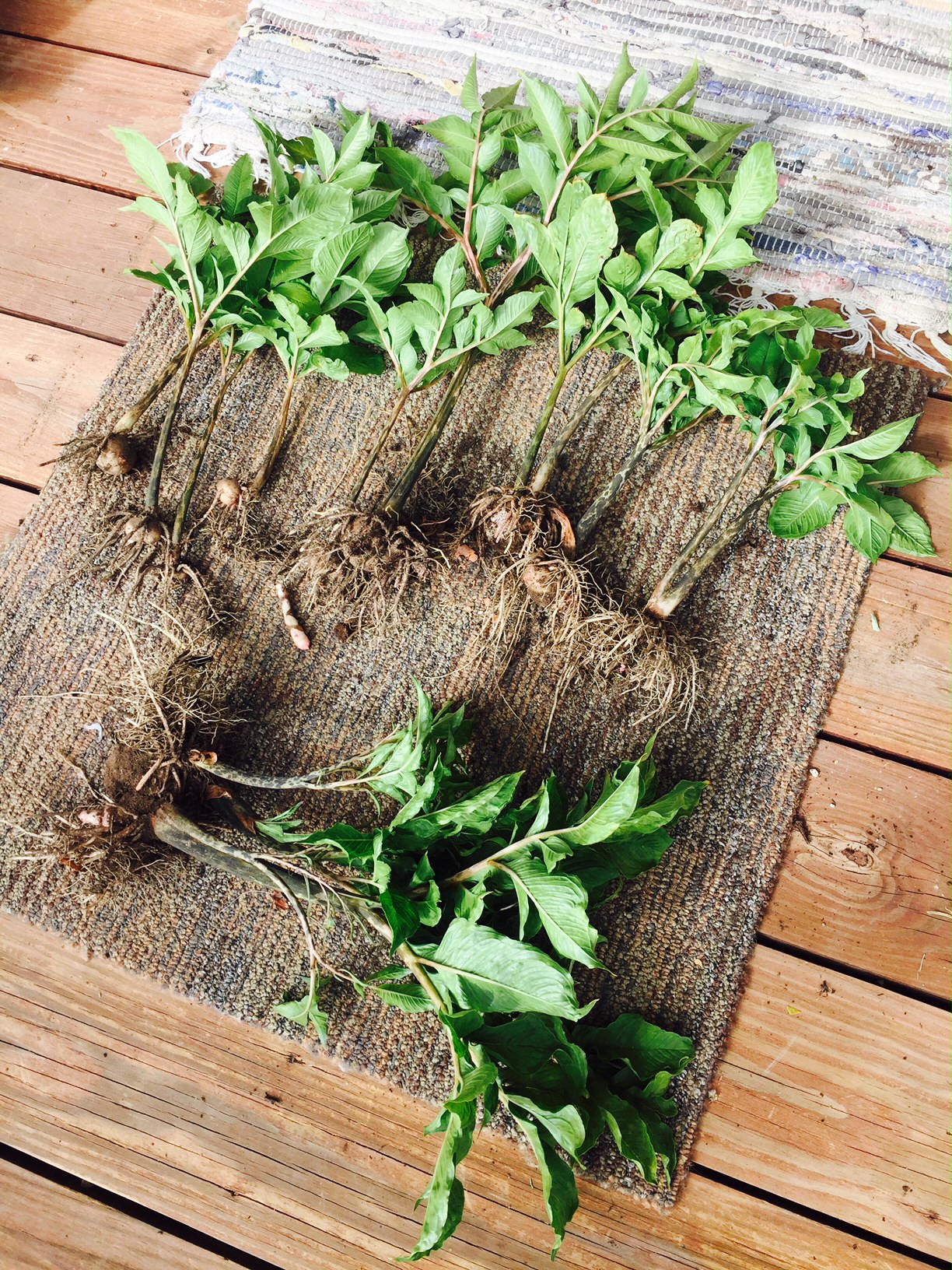 Fast forward to today, this mature bulb is full on in bloom and stink mode. In fact, it’s still a bit chilly in March here and this big guy (that’s what I call it/him anyway!) has to hit the deck to air out.

Although an adult snake palm grows to 36 inches wide with a 60-inch height, the flower stalk, or inflorescence, can grow as tall as 72 inches. In fact, it generates this huge blossom during a two-week period each year while the actual open flower remains viable only for several days. The plant needs successful pollination to further the species’ reproduction. The bloom emits a strong decaying scent for one day, attracting insects that pollinate it. Although the flower stalk is extremely tall, the actual flowers are cleverly packed along the stalk’s base where insects arrive to find no real decaying flesh for sustenance.

The snake palm cannot flower every year unless it has a large enough tuber. Acting as a storage organ for nutrients and water, the tuber needs to be at least 7 inches wide or larger to produce a blossom. The sheer blossom size requires a lot of energy from the tuber; small tubers do not have the nutrient reserves to produce the huge flower stalk. In fact, adult tubers can be as large as 12 inches wide and weigh 22 pounds. Pat’s “big guy” is about 9 inches or so when dug in the fall but it shrinks through the winter and as it blooms. 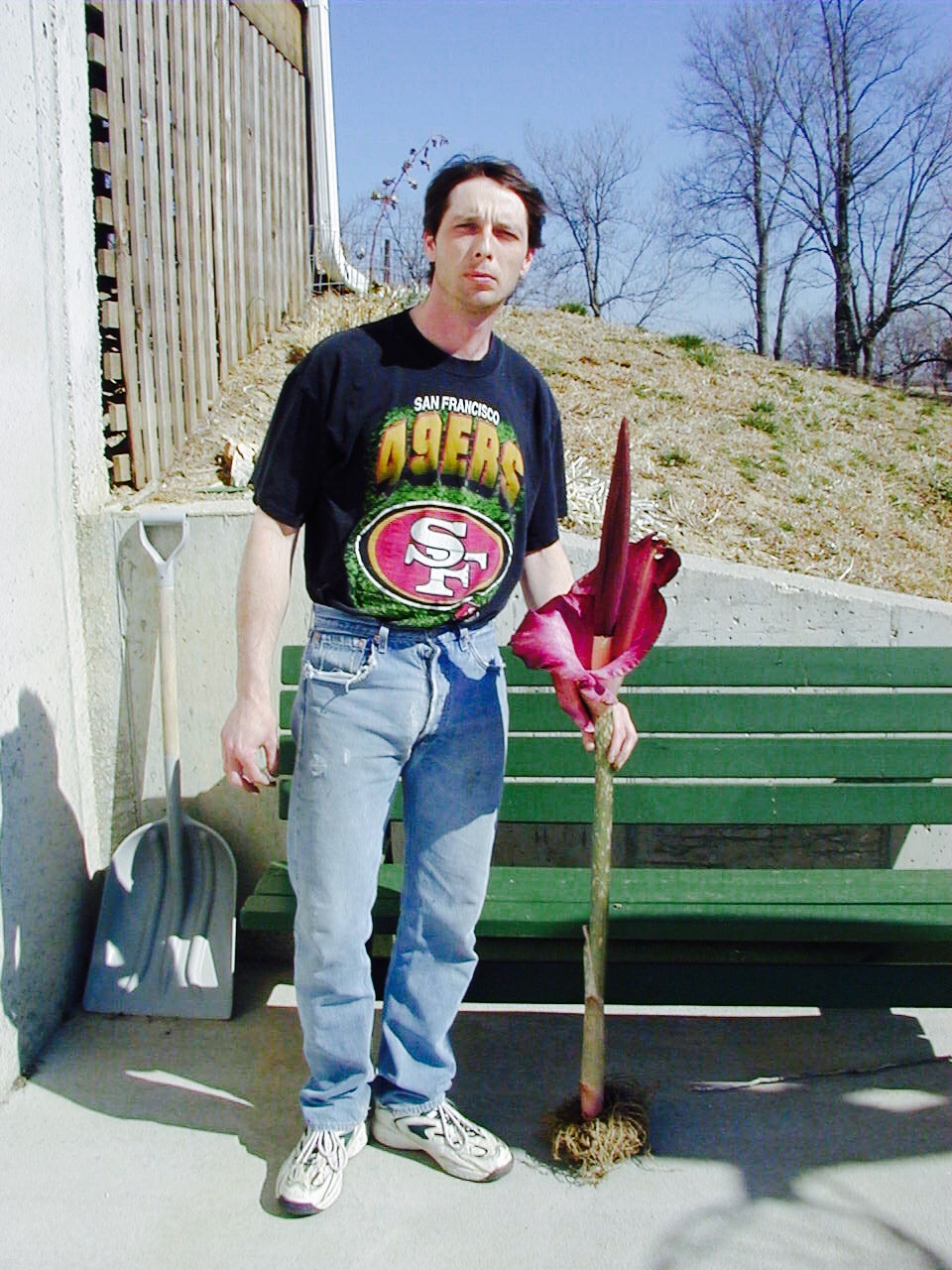 How Pat cares for it throughout the seasons. Told by the expert herself!

I plant my Snake Palms in the Spring after a chance of freezing has passed. The large ones I plant in the ground and the small ones and the babies I plant in large pots. It makes it easier to find them in the fall that way. I make sure they are either in full shade or mostly shade as the crown leaves with burn in the sun. After the green leafy crown dies down in the fall, I remove it to reveal a pink “nose” on the corm from where the next stalk will grow. I then carefully start to dig and uncover the corm trying to locate any babies growing outward from it. After I lift them out of the dirt I will let them sit outside for a couple days protected from the sun and rain to dry a bit. Then I place all the corms in a bushel basket to be stored in my cool, dry basement. 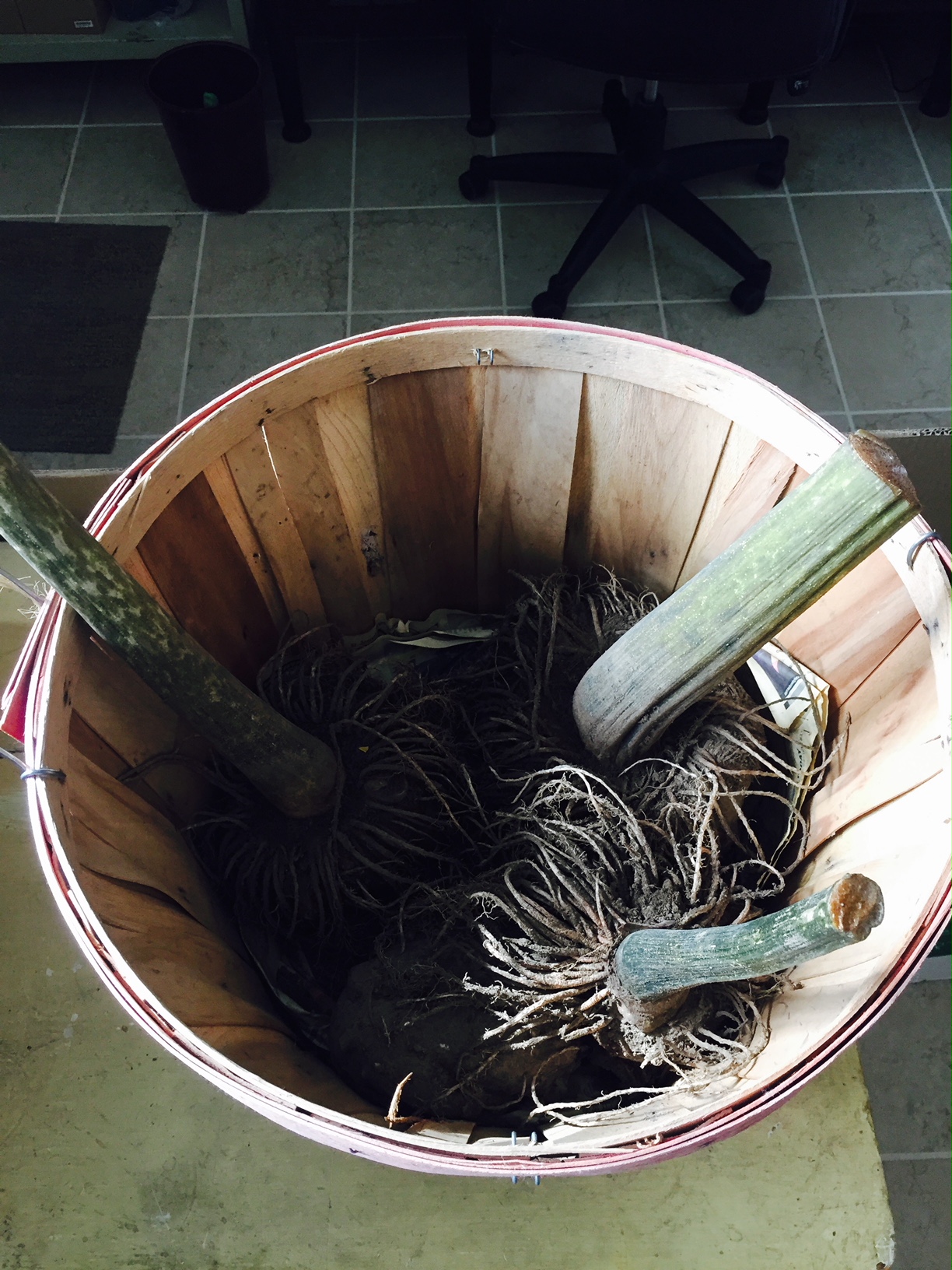 In February or March, the largest of the corms will start to “wake up” and the stalks will begin to shoot up from the bare corm. I bring them up so they can have warmth and light in my house. In a matter of days the stalk has grown again, but this time it opens into a very large crimson colored flower…..one of the unique things I have ever seen. But the odor gets pretty intense and I have to move it outdoors for a couple days until it subsides a bit. After about a week or so that stalk with die down and I will remove it to reveal another pink “nose”, where the next stalk with the green leafy crown will emerge after I again plant it back into the dirt. If you lived in the tropics you would never have to dig this corm. But here in the Midwest, it gets too cold for them to stay on the ground. I have occasionally missed some babies when digging the large corms and was surprised to see that they had survived the winter and came up! Because I value my “big guys” and because it takes so long to get them that large – sometimes 4-5 years or more!

There are many other types of amorphophallus plants. You may have heard of the huge ones that only bloom every so many years like here. 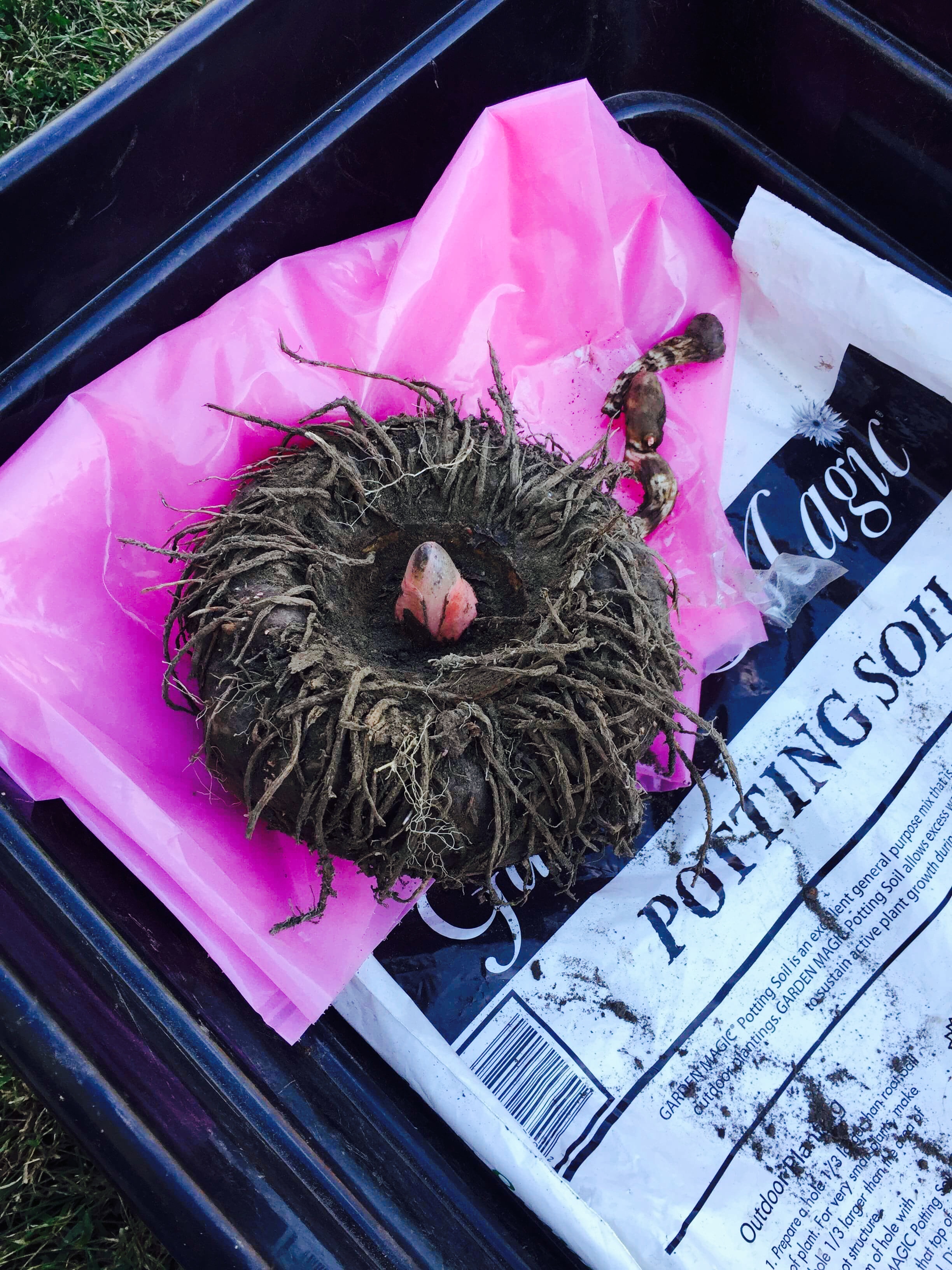 Plus, another fascinating fact is that the tuber (corm) is edible and used in a variety of Asian cuisine and currently in foods hitting the US health market. The food made from this plant known mostly as konnyaku, it’s Japanese name is made into a white or black yam cake. Noodles are made from the cakes are called shirataki.

Konjac has been known in Japan since the sixth century as a medicinal food, and it has been eaten for 1500 years. In 1846, the publication of the book Konnyaku Hyakusen (100 recipes of Konnyaku) demonstrates its popularity in the Edo period.

Konjac is also ground into flour or made into a jelly substance. This can be used as a substitute for traditional gelatin. Remember that jello is ground up bones? Well, here is your vegan-friendly gelatin substitute!

Konjac has become widely used in diet foods and substitutes as it has barely any calories and high in fiber found best used in diabetic food alternatives. Besides many health benefits used in traditional Chinese medicine, it has also had it’s not so glorious headlines in the news. Konjac candy (a fruit jelly made from konjac) has been banned in certain countries due to choking-related deaths. Unlike other gelatin candies, konjac is not easily melted in the mouth and requires chewing to break down. Thus, unintentionally swallowing could result in choking especially in the young and elderly.

Konjac corm powder is used in vegan alternative seafood products and dietary supplement widely known as Lipozene. Curious on the recipes out there I found an interesting recipe here.  Curious yet if I’ve consumed konjac in the past, I set out to the grocery stores to see if any ingredients contained konjac flour, glucomannan flour or konjac gum. 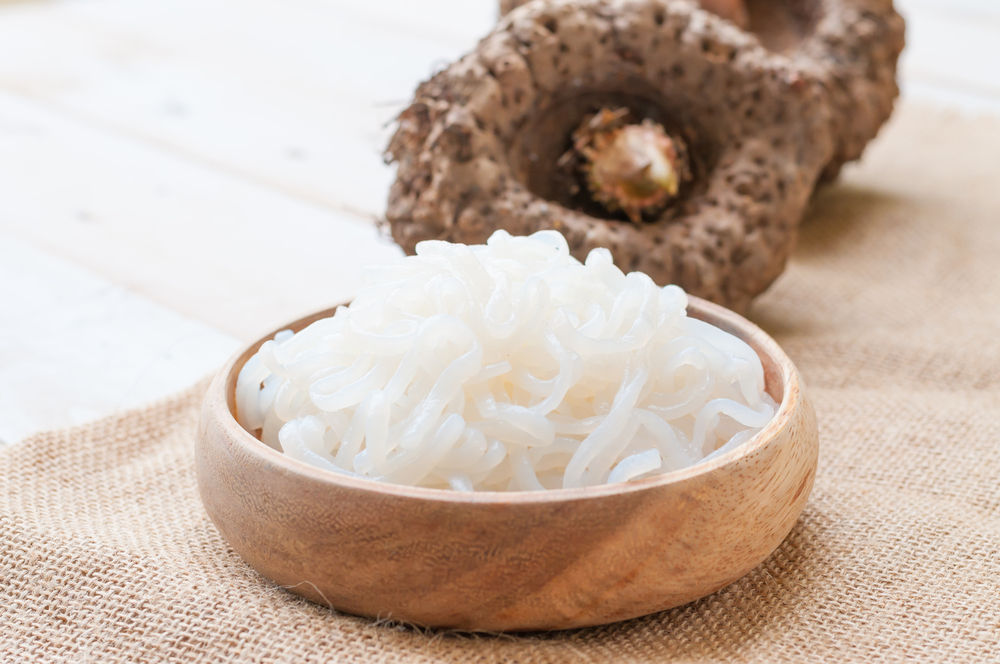 I suspected a certain nondairy pudding I’ve liked (in emergencies), and a calorie-free noodle usually found in the tofu refrigerated section. Here is what I discovered, Miracle Noodles found at Wal-mart and Skinny Noodles both are made from Konjac powder. I wasn’t a particular fan but thought for those abstaining from carbs that this could be an alternative.

Well, needless to say, I’m sure Pat won’t be eating her plant’s babies. She loves growing them too much. 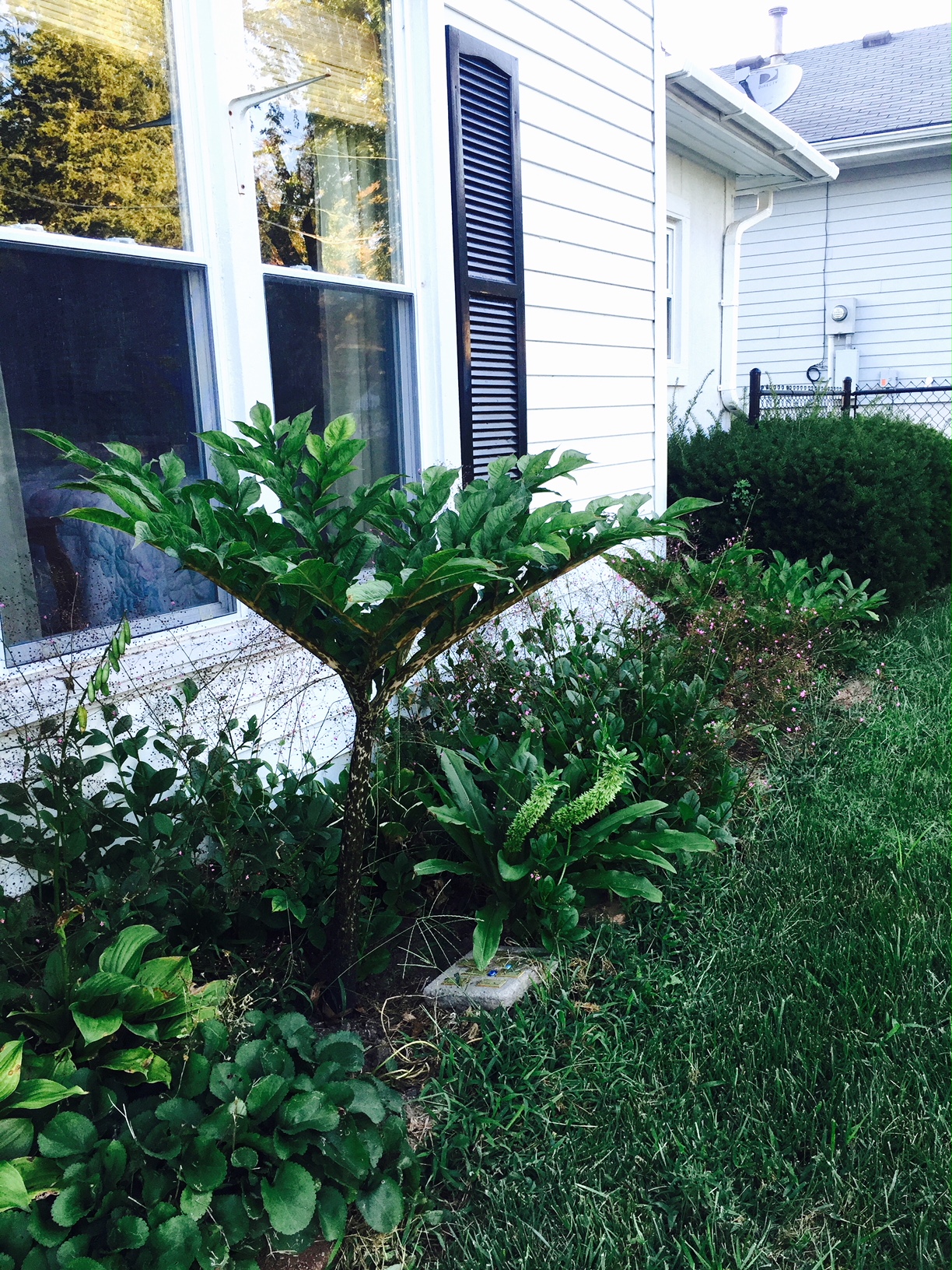 We definitely have a love affair with plants, I will share soon our pineapple plant predicament last summer soon!