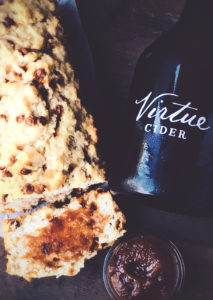 In a bowl, combine flour, baking powder, and salt. Add all together: 2 tbsp. of the melted butter, reserving 1 tbsp. For later, maple syrup, and the hard apple cider. Stir till combined. Add in the cinnamon chips.

Cinnamon chips can be found during the holiday season in the baking aisle next to chocolate chips.

Pour batter into prepared loaf pan and then drizzle remaining melted butter. Bake in middle of the oven for 45 minutes. Cool on rack before serving for 10 minutes.

Enjoy with a smear of Dutch Apple Butter and a glass of Virtue Cider!

Chop the 6 peeled, cored and quartered apples into small chunks and place them in a saucepan. Add 3/4 cup unsweetened apple cider or apple juice (can be reconstituted from frozen), 2 to 4 tablespoons the sweetener of choice (agave syrup, honey or sugar), 1 teaspoon ground cinnamon and 1/4 teaspoon ground cloves.

Bring to a boil, then reduce heat, cover, and simmer, often stirring, for 1 hour. The apples should be very mushy.

Remove cover and simmer for another 1 to 2 hours, frequently stirring, so the fruit doesn't burn. The mixture will get thick and turn dark brown, from the caramelized sugar.

When you stop cooking is up to personal preference. Again, the picture shows apple butter which was cooked until it was shiny, dry and thick like jam. You can always quit while it is still soft and a bit runny.

Recipe makes one loaf with two cups of apple butter.